FORMER PRESIDENT Jimmy Carter is known to most young Americans today as a resilient advocate for human rights and free and fair elections, a seemingly ageless cancer survivor who builds homes for Habitat for Humanity in his spare time.

But at the time, Carter was the first president to openly embrace the support of rock ‘n’ roll, jazz, gospel and country musicians, not only during the election campaign, but as friends.

His friendships with Bob Dylan, Willie Nelson, and Gregg Allman – all of whom appear in interviews for the film – were not cynical endorsements, but extensions of Carter’s musical taste. The friendships lasted well beyond Carter’s sole tenure from 1977 to 1981.

“Jimmy Carter: President of Rock & Roll” is a new documentary from Shore Fire Productions that uses vibrant archive footage and all-new interviews to paint a portrait of this often misunderstood CEO from Georgia.

The film premiered in theaters a few weeks ago and premiered on on-demand TV in October. We spoke to director Mary Wharton and producer Chris Farrell.

Much of the press for your film centers on the “reveal” that the person who smoked weed on the roof of the White House with Willie Nelson was Carter’s son, Chip. Does it bother you that this anecdote seems to be getting so much attention?

Chris: We are not surprised! It’s a funny and funny anecdote, but almost like a throwaway at the top of the movie, just to eliminate it.

Married: Independent documentaries already have enough trouble in normal times, so I’m just thankful people take note! Everything you need to attract people. It’s like old-fashioned tent rebirths – you get people clapping, singing, whatever it takes to get them inside the tent to hear the message!

One wonderful thing about the movie is that it shows how funny Jimmy Carter really is – he’s always had a great sense of humor, and not everyone knows that about him.

Married: It can be mischievous too! Bob Dylan is keen to say towards the end of the film how multifaceted Carter is. He was a naval officer, a president, this very serious and intelligent man. And then you watch the sheer joy Carter experiences when surrounded by musicians playing and enjoying the music. It’s just another layer.

Chris discovered this connection Carter had with the music of the day. And he thought it could make a great movie. I never knew that about Carter.

There is a bit of history in the movie – for example, the sad juxtaposition of how the hostage crisis in Iran has kind of deflated any sense of new possibilities.

Married: There are some things we would be remiss not to cover, like the hostage crisis in Iran or the Camp David peace accords in the Middle East. But we didn’t just want a list of accomplishments either.

We thought that including part of the story was important for the younger ones who see the film. We showed an early cut to one of our 15 year old trainees. She had never heard of the Camp David accords and was fascinated by them.

Chris: It really shows Carter’s character. He succeeded in bringing together these two longtime enemies, Israel and Egypt, and building trust and bridging that divide. So it really fits the central theme of the film in that way. 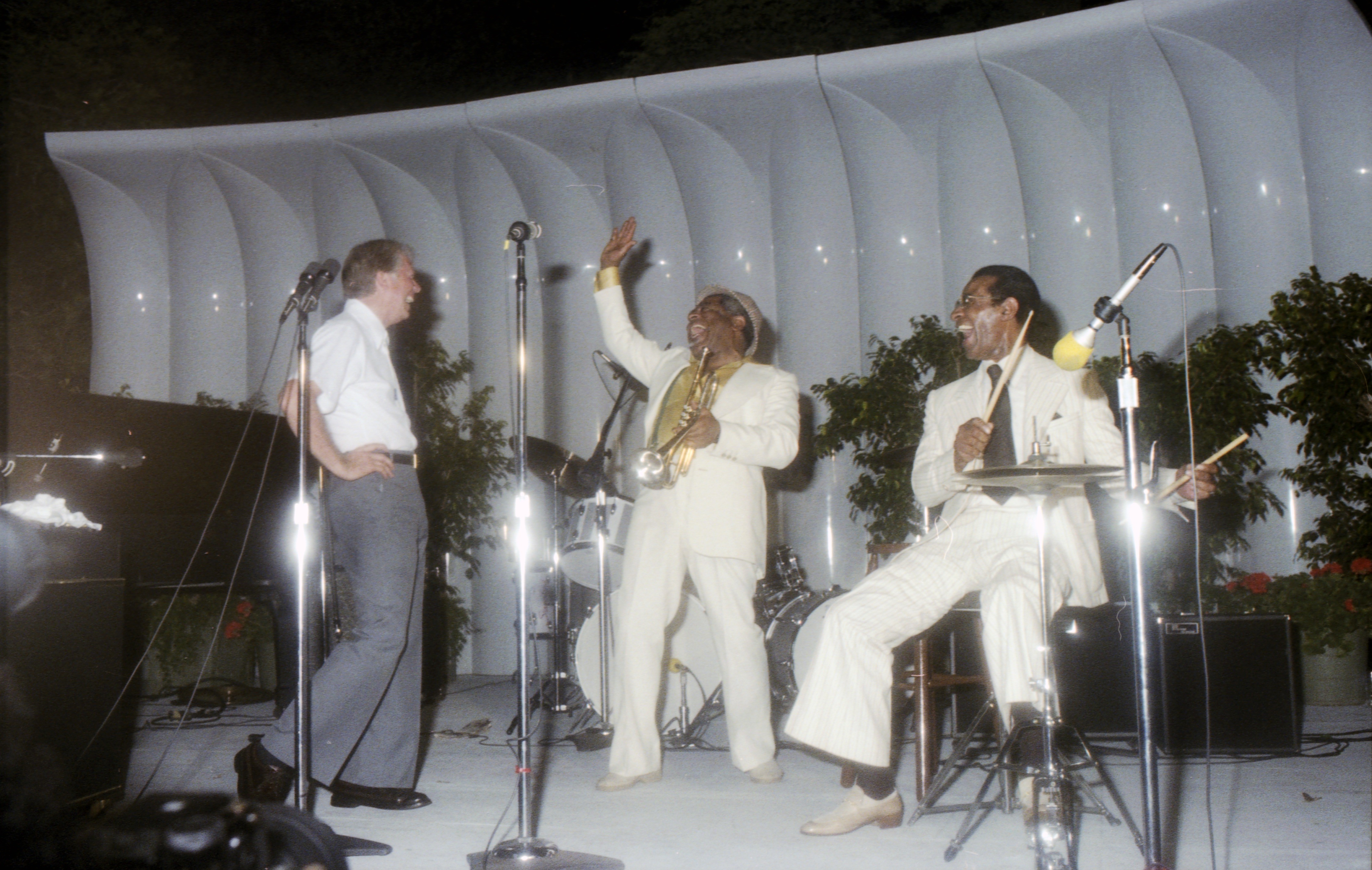 When I saw the scene where Dizzy Gillespie calls Carter on stage to sing “Salt Peanuts” with him – badly – I thought you would never see that today. A politician who does something so spontaneous and fun.

Married: People have a picture of Carter as that fuddy-duddy Mr. Rogers guy. But he’s up there singing “Salt Peanuts” and cracking up! He is always ready and able to laugh at himself.

Chris: Today there is typically a calculation involved in any decision in politics. Will that earn me votes? Is this going to get me in trouble? But the thing you see about Jimmy Carter is that he didn’t like gospel, jazz, or rock’n’roll because it would get him votes. It’s just who he is. This is another example of his moral courage and moral leadership.

People are used to politicians today touting celebrity support. But at the time, Carter’s friendships with rock and country artists were not guaranteed to be popular.

Married: One thing we want to convey with the film is how times have changed. When Jay-Z went to the White House to visit the Obamas, no one paid much attention. Here’s a guy whose career was originally built on portraying his experience as a former drug dealer, and that wasn’t a problem, it wasn’t even mentioned.

But in the 1970s, when Gregg Allman was arrested for cocaine after Carter befriended him and the Allman Brothers, any other politician would have immediately distanced himself. Most politicians of the day would have considered professional suicide to continue to associate with a rock star arrested for drugs.

It was a major risk for Jimmy Carter to express his support for Gregg during this time of crisis. But Carter wasn’t worried about whether it would cost him votes – for him, it was the right thing to do to stand next to a friend.

Tell me about the timeline and compilation of the interviews. Gregg Allman of course passed away in 2017.

Married: Gregg’s interview is the only one we haven’t done. This was done for the Rock and Roll Hall of Fame. Our writer, Bill Flanagan, knew the interview existed and the Hall of Fame kindly allowed us to use it.

All of the other interviews we shot were about a year and a half long, starting in 2018 and ending in the spring of 2019.

We interviewed Jimmy twice, for two hour interviews. A real highlight of this whole experience was the private audience we had with the Carers, to show them the final cut of the film, before COVID hit. We watched the movie with them at Plains High School. It was important for us to get their approval on the film.

Carter being interviewed for the film in Plains, Ga.

The big question: How the hell did you get an interview with Bob Dylan, who hardly ever does interviews?

Married: (Laughs) Bill Flanagan had previously interviewed Dylan and has a great relationship with Dylan’s manager. Bill wrote a very convincing letter about our film project, requesting an interview with Dylan to get his thoughts on Jimmy Carter and Carter’s importance to music and to the world.

Chris: Pinning Dylan to a specific time and place was his own challenge, let’s just say (Laughs). We weren’t sure for sure if that would ever happen, and we kind of took this attitude where we’ll believe it when we see it. But we stayed excited and ready to go, anywhere, anytime, yet we could learn that Dylan would see us.

But when it really happened, Dylan was so generous with his time. He stayed and talked to us for a lot longer than expected, and came up really prepared with what he wanted to say about Jimmy.